It was one of those days in the Keys when the idea of fishing was silly. The wind was up around 30 knots; it’d been blowing like that for days. Capt. Will Benson and I were in his workshop playing with tarpon patterns when our conversation wandered to redfish flies. Will rummaged around and pulled out this monster. Will is a renowned Key West captain fishing a couple hundred days a year but he spent his college hears fishing the Mississippi Delta. At the time he had just released “Drum” that year’s World Angling film so what was I to say about a redfish fly that was bigger and nastier than any I’d seen before. Still I had my doubts about the fly.

Will often spends the month of January in the Mississippi Delta chasing redfish. It’s a great fishery, and I’d confirmed that this was a fly he and his buddies Brian and Travis Holeman use there. These guys aren’t interested in small redfish, a big fly that fish can see in the dark water is important. Willie the Pimp is big and the original chartreuse version is certainly visible. After leaving a sample kicking around the shop for a few months we figured a more … realistic version might be nice so we worked up the white Willie the Pimp. White baitfish patterns often work for redfish. Our gray Woolly Mullet also does well on redfish. Another captain we tie for Jacob Shemper, fishes the Mississippi Coast and Delta, white is also one of his favorite colors.

As we have tied this fly shipping it south we decided it was too good to leave to warm water anglers. They way it pushes water, it’s bulky head … has to be a good striper fly. We don’t go to our Northeast waters with out it!

Anglers chasing big redfish should have a couple of these big beasts in their box. We put it on a 3/0 Gamakatsu SS15, weight it with large stainless steel eyes then finish the head with our heavy fluorocarbon weed guard. It can sink, push water and bounce off of oyster bars. 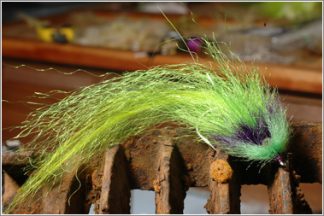