This is one of the flies in the “R&D” (rip off and duplicate) series introduced at the Bonefish Tarpon Trust 5th International Symposium. Aaron Adams is a former commercial fly tier, marine biologist and director of BTT. Aaron’s “Fisherman’s Coast” and “Fly Fisherman’s Guide to Saltwater Prey” are essential to understanding flats fishing.

Aaron’s patterns are basic, beautiful and remarkably effective. His Simple Bait was originally tied with exactly three materials; synthetic Slinky Fiber, and E.P. Brush and a stick-on eye lashed and glued to a hook. We thought it would be almost as simple but add movement if we worked in a couple of natural materials. Like our Willy the Pimp the tail is a bit of Cashmere goat veiled with Slinky Fiber. A mix of fox fur and flash hollow dubbed substitutes for the E.P. Brush head.

The first time we tested this fly was with Capt. Jeff Legutki in the Everglades. He wasn’t too impressed before we tied it on. He thought the tail was too sparse, that it would foul and not be durable enough. We tied it on anyway and started catching little snook right away. The Simple Pimp wiggled and undulated while stripping true. Those little guys couldn’t leave it alone. After considerable abuse an eye finally fell off but the rest of the fly stayed intact until we ran out of tide.

The 1/0 Simple Bait is a relatively small general baitfish pattern. It’ll catch anything keyed in on three inch baitfish. The larger version is great for stripers, tarpon and anywhere big bait is being served for lunch. 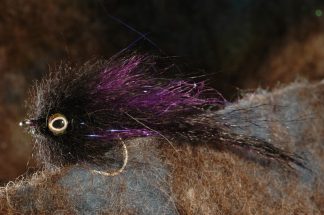