We never planned on having a series of Pimp flies. It started when Capt. Will Benson sent us a nasty looking sample a beast of a fly he and others were fishing for the big winter reds in Louisiana. It was tied by a captain, a bit rough but good enough. We have the luxury of putting more time and thought into flies. This original Pimp looked so good in the water and worked so well we decided it needed to be adapted so other fish could make a fool of themselves.

Willy the Pimp the original Pimp pattern, is a beast is big. Tied with flowing Cashmere goat for the tail veiled with a synthetic material all behind a bulky hollow dubbed head it pushes water. In 2014 we scaled it down and simplified it for snook and smaller redfish and named it the Simple Pimp. Both patterns performed so well that we had to adapt it for trout.

Tied in general freshwater baitfish colors the Trout Pimp is a small but bulky fly. The head pushes enough water to send ripples through the tail and has enough sparkle to show up in darker waters or low light. It is lightly weighed on the shank. We also fish it with a sink tip, full sinking line or with a little conehead fashioned with tungsten putty. Don’t limit it to trout either. It’s a very effective pattern for any freshwater fish chasing bait. 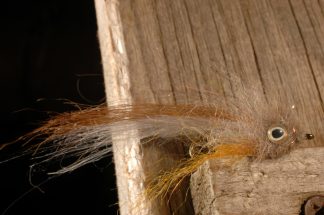