We developed this gurgler years ago for Capt. Alex Boehm. He had just signed on as a full time private guide for an angler in Key West, a man who had the means to employ a captain on his personal staff. One of the Alex’s first big trips was to Ascension Bay and he needed a baby tarpon fly. This was before we had the ability to send photos back and for so we talked about a few patterns and I started tying samples and sending them back and forth, it took a while. We ended up with a gurgler style fly with rabbit fur tail and front collar. Alex wanted a fly that would keep pulsing after being stripped and fish in or just under the surface.

This original version confused some anglers because everyone expects a gurgler to float high. Over time we altered the fly. It now has a larger piece of foam. The fly as is floats but it is commonly trimmed to settle into the surface film. Trim the backend first, the sides can be taken down a bit and the front can be altered to push water the way you want it. Of course fished as is it has been very effective too. This fly is certainly more fishy than the original Gartside Gurgler.

Over the years this fly has become one of our more versatile saltwater patterns. It has jumped plenty of big tarpon, fooled permit and barracuda, feed snook and has migrated to the Northeast landing blues and stripers. 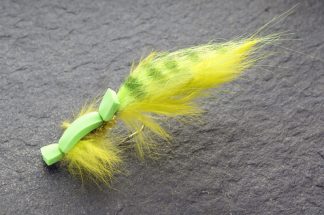