The Bonefish Bitters is one of those flies we’ve resisted adding to our stock selection for years. It’s a relatively simple fly, nearly every large offshore tying company produces it, it’s available everywhere. And sometimes we just cop an attitude about a fly pattern.

Eventually it became obvious that we had to do something, too many lodges want customers to show up with a Bonefish Bitters.

We started playing with something that looked like a Bitters and leaving it on the tying bench. We’d scratch our heads, let it rest and try something else. Eventually we added dubbing underneath the wing and worked in some micro legs to compliment the typical silicone legs. With the addition some sweet badger fur as a tail we now have a fly we love!

The S.S. Bitters is a pattern for bonefish everywhere. The notoriously difficult Islamorada bonefish will eat it. It’ll perform well in the Yucatan where the original Pop’s Bonefish Bitters was introduced. And Bahama’s bonefish? They’ll crush the S.S.Bitters.

The S.S. Bitters comes with a weed guard and in two sizes, #6 and #4. It’s a little heavier than a fly weighted with bead chain eyes but because of the body and wing material it sinks no faster than a typical bonefish fly. We have three colors tan, olive and brown. Tan and olive are obvious but when customers first saw this pattern they really wanted a brown version. Brown is an essential color in Hawaii and important on other bonefish flats but we developed the color scheme more with redfish in mind. Carp will eat this thing too. 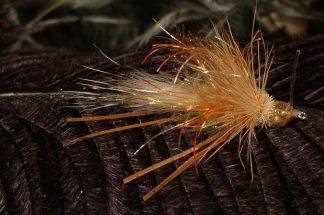