The iconic Keys guide Steve Huff did not develop the original Backcountry Sweeper for trout although we’ve joked for some time that it was just a marabou Muddler with rabbit fur; a trout fly for tarpon. Then the guys at Grey Reef Lodge turned it from a tarpon fly back to a trout fly by simply casting it for trout. Eventually we put on a trout hook added a cone head and twisted it up in some fresh water bait fish colors.
Sculpins are key forage species for trout. Nearly ubiquitous in trout streams they feed on nymphs and larvae among the cobbles and boulders. Generally dark brown or olive they are wonderfully camouflaged but trout can see them. When a sculpin pulls itself off the bottom they are particularly vulnerable. Fish the trout sweeper with a sinking line using the techniques described by Linesemman and Galloup in “Modern Streamers for Trophy Trout”; sinking lines, cast roughly across the current retrieving with a forceful downstream jerk and strip. 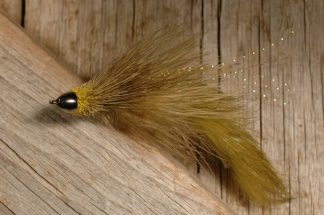