The Bad Tail Squimp is the first fly we introduced after solving a mystery.

Some time ago we bought some samples of badger fur. We immediately fell in love with the long fine almost silky fiber, gray at the base shading to cream at the ends. After messing around a bit we introduced the Badger Tarpon Fly. The fly sold well and we were burning through the patches of fur we had in stock. One day Tim was restocking and opened yet another package of badger fur but it wasn’t at all the same. This patch was creamy tan, moderately coarse with a nice crinkle and wonderfully translucent; great stuff but obviously not badger fur. We immediately envisioned some great flies but we had no idea what this single patch of fur was. The oddball patch got set aside.

Eventually Badger Tarpon flies started selling so well we order a whole badger hide with the tail on. That was it! That odd package of fur was from the base of the tail. We order a bunch of tails and started playing. The Bad Tail Squimp is the first fly we developed using badger tail.

We have an affinity for natural fur. Many good flies incorporate synthetics where a natural fiber would be a better choice. We’ve tied a number of Squimp patterns for custom orders, some simple others more complex. Invariable the wing has been made of craft fur. With badger tail for the wing and tail the Bad Tail Squimp is the fly all the others have been trying to be.

The smaller #6 Bad Tail Squimp tied on the Gamakatsu SS15 hook weighted with a small brass eye, perfect for bonefish. With permit in mind we up-weighted the larger #2 and put it on the heavy wire Gama SL11. The #2 is also the perfect size for large bones in the Keys or Bahamas. 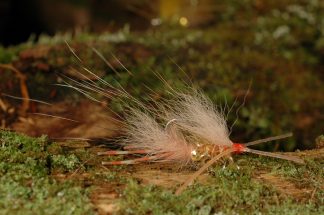