In the book “Flies” by J. Edson Leonard there are four different Gold Ribbed Hare’s Ear patterns. By the time the book was published in 1950 some version of a Hare’s Ear had been fished for close to a hundred years. Anglers can dismiss the Hare’s Ear nymph. That’s likely due to one of two things: anglers kind of think of this a relic from time past or they have in mind the bulky poorly tied modern versions that look more like a ball of fuzz than a bug. We tie ours to look like a bug!

The Justa Hare’s Ear is weighted on the shank and sinks about as fast as a comparable bead head version. We use traditional hare’s mask blending the dubbing ourselves to make it buggy. The body is slim like most actual nymphs and we tie in the thorax so it’s wide but flattened to mimic the legs and wing pads. There’s not a lot of science to fishing the Hare’s Ear, pick one that matches the naturals size, decide whether it’s closer to olive or brown and get it down to where the fish are feeding. This fly works great as a dropper off a dry fly or driven to the bottom with some weight.

In our fly boxes the Justa Hare’s Ear is an essential trout fly. We tie it in size 14 to 18 brown and olive. 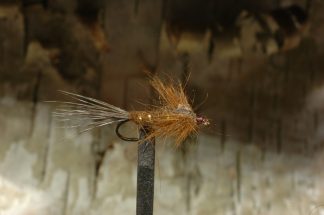 You're viewing: Justa Hare’s Ear
$3.00 Out of stockSelect options
0