Anglers today usually refer to this style fly as a “soft hackle” fly. That name works but as a nod to a little American fly fishing history we use the name Pete Hidy came up with for his soft hackle with a “noodled” fur body – the Flymph. A Flymph was meant to imitate the emerging nymph, the moment when the nymph turns into a mayfly. Hidy fished with James Leisenring who was a legendary wet fly angler. Leisenring was so good he wrote a book called The Art of Tying the Wet Fly and was known for his”Lift” method of fishing wet flies. Hidy started tying the Leisenring’s traditional spider style wet flies but tweaked them with a fur body instead of the traditional silk. When Leisinring re-issued his book it came with a subtitle, “… and Fishing the Flymph” and another author V.S. “Pete” Hidy.

There’s great information on how to fish these flies in Leisenring’s book but generally they are fished a little below the surface either as a single fly or behind a dry fly (during a Pale Morning Dun hatch a Comparadun followed by a #16 brown/yellow Flymph is pretty exciting). Flymphs are also good trailing a heavy nymph. This fly is effective fished dead drift in the current but is also great fished with small “lifts’ as it drifts imitating a nymph trying to get to the surface . 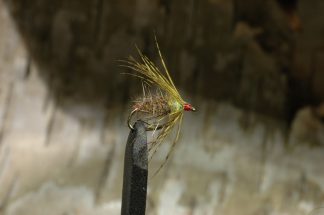