The “Evelyn” is a modification of several different tarpon, snook and redfish patterns. It has a rabbit tail and E.P. Fiber head similar to Capt. John O’Hern’s Wheel Fly but the head it a different shape with the epoxy eyes placed back a bit. The head is constructed like our Willy the Pimp but trimmed like the Woolly Mullet. We use the same marabou veil around the tail as used in the Backcountry Sweeper. This provides a flowing transition from the head to the tail. Overall the Evelyn Modification is a common and general baitfish fly.

When we started thinking of color schemes for the Evelyn Modification we focused on baitfish in the mangroves; think sheephead minnows, killfish, mangrove snapper. But especially the chartreuse and the black and purple Evelyn Modification has found a purpose on the tarpon flats.

The Evelyn is designed to fish near the surface. When stripped it dives a little (more so when tied to fluorocarbon tippet) then slowly rises back to the surface with the tail undulating and marabou pulsing. It begs to be eaten.

Tied on the 2/0 Gamakatus SL12 the Evelyn Modification comes in five colors and is available with a bend mono weed guard that will keep it from hanging up in the mangroves. 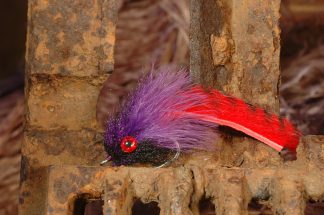