Comparaduns have a two origin stories. The eastern story starts with Fran Betters in New York State. In the mid-sixties he came up with the Haystack fly; a simple fly with a deer hair tail, an un-spilt deer hair wing and simple dubbed body. In the early seventies Al Caucci and Bob Nastasi also from upstate New York tweaked the tail of the fly by using stiff hackle fibers tied “pontoon” style. They called it the Comparadun and introduced the pattern in their book Hatches (1975).

In the west, again in the sixties, Doug and Carl Swisher were tying and fishing their feather wing No-Hackle flies. At some point they tied up a version with deer hair tails and wings that look a lot like the Haystack but tied in different colors. Their original No-hackle went on to become a well-known fly for the most difficult fish but their hair wing version never got the same recognition.
The real point is that on several occasions a fly much like the Comparadun has been conjured into a fishing machine. The S.S. Flies Comparadun is no exception.

Peter at S.S. Flies started fishing Comparaduns soon after “Hatches” came out, it’s been his favorite dry fly since. After fishing the pattern for a few decades he has some opinions about how it should be tied. The materials are specific. The wing is tied with a deer hair selected just for Comparduns. The tail fibers come from Coq de Leon roosters, they are stiff and have speckles, they’re beautiful. We custom blend natural furs for the body with just the right colors. To ensure the fly sits upright in the surface we split the tails and tie the wing in as a semi-circle (the original was closer to 120 degrees than 180). We also tie the wing more upright and swept back to give it more of a mayfly profile. 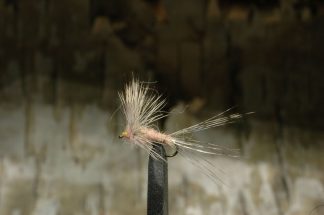